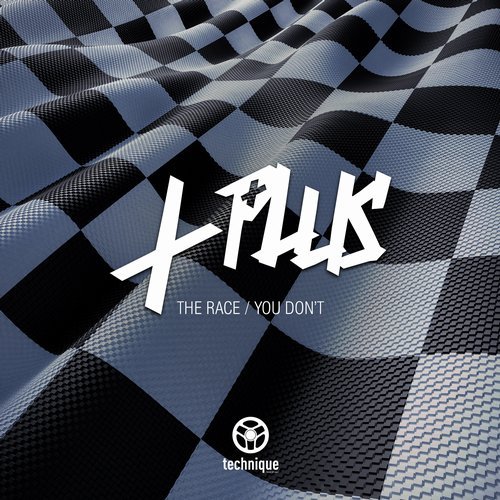 Cuts from L Plus’s debut album, Hideout hit radio and dances hard, being supported by the likes of Friction, Hype, and Drumsound & Bassline Smith. Far from resting on his laurels and plaudits, though, Mr Plus has clearly been putting the studio hours in, and he’s back with this follow-up two-track release that shows he’s ready to take his sound even further. The Race is a masterclass in frequency range control and manipulation.

Right from the intro there’s weight in the low-end and tension in the high-end. As it all comes together in the drop, L Plus achieves incredible feats of production dexterity as multiple layers of sound fill the spectrum, every one of them adding an extra boost of rhythmic drive and energy. This is no dry technical exercise though. What it amounts to is a high-power dancefloor neuro-tinged workout.

It’s a wall of sound set to hit raves with savagery, each bassline sweep and each uppercut snare striking with perfect accuracy. We step into eighties soundtrack territory in You Don’t. Those synth strings and vintage drums in the intro paint forgotten-classic vibes all over the landscape. As the tune drops we enter a crazy rhythmically shifting game of call-and-response between bassline pulses and mid-range stabs.

This is nowhere near the end of the story, though. We move through a phase of acid-style bass modulations, leading to a delay-fuelled breakdown and rebuild into a second drop that’s well worth the wait. This is going to grab the dancefloor’s attention and flat-out refuse to let it go.

Ever since he’s been on the scene, L Plus has been a production wizard, pushing sonic and stylistic boundaries. Now he’s pushing even beyond the standards he’s laid out for himself just a few months ago on his own album. Musically, rhythmically, and in the realm of pure studio mastery, he’s got plenty more fireworks to loose off.