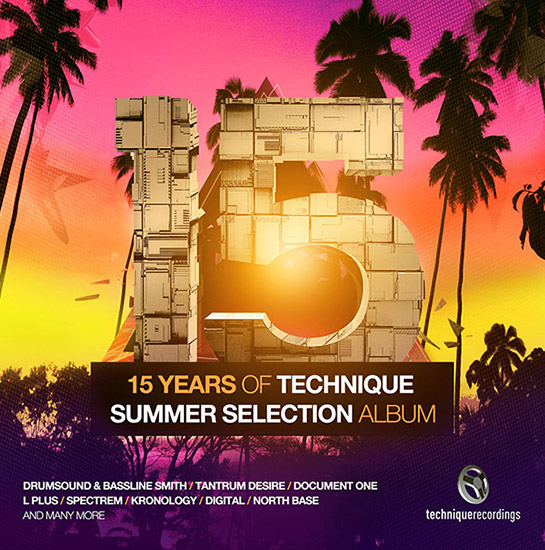 It’s sunshine time again. The time when we need a new D&B soundtrack to score our festivals, carnivals, pool parties and barbecues. And you’d struggle to find anyone better qualified to curate that soundtrack than Technique’s bosses Drumsound & Bassline Smith.

Just a quick glance at their immense back catalogue of anthemic releases or their packed international bookings diary is enough to demonstrate that they know exactly how to bring those summertime vibes.

Things kick off in suitably monumental fashion with a cut from Technique’s head honchos themselves, “I Need Somebody”. If you were looking out from a festival stage at a sea of excited hands in the air, this tune’s searing vocal hook and unrelenting waves of bass would suit that scene perfectly. And, of course, this album contains a lethal dosage of similarly colossal tracks.

For example, MaxNRG enlists a quirky vocal from Marianna to boost the hype-levels on “Headshot” and recent signing Kronology delivers the driving and euphoric “Untouchable”. Plus, there are some sizeable contributions to the big-room roll call from a few names you won’t have seen on Technique before, like Oder’s “Closer” and T-Phonic & Deadman’s “Show Me the Way”.

But summer’s not all about the shades-on daytime raving, we need some choice sunset material too for when things get a little darker. Document One and Spectrem exemplify this beautifully with the laid-back and jazzy “Falling” and the Kyphosis-laced “Fade” respectively.

Helsinki’s liquid maestros LAOS pass through to drop “City Lights” and “Belong”, and Tantrum Desire treats us to the effervescent “Sea Breeze”. For when things get darker still, there are tracks like the technoid, percussive world-unto-itself of Salaryman & Dark Machine’s “Night Shift”.

Guys like Conspire and Brian Brainstorm bring some full-on jungle, and the whole compilation is peppered with alternative sounds like Digital’s dub workout “Groove Together”.

The 31 tracks here represent a cross-section of the mighty, multi-stranded, multi-form D&B scene and what it can do for summer 2015. There are names you’ll know and names you might not know yet. There are huge mainstream anthems and shadow-bound subtleties. There are tunes for midday and tunes for four in the morning. And for four in the afternoon the next day.

Ultimately, this isn’t the sound of the summer, this is all the many different sounds of the summer put together on one album. So, the soundtrack’s sorted, time to go out and have a summertime that’s worthy of it!
Tracklisting