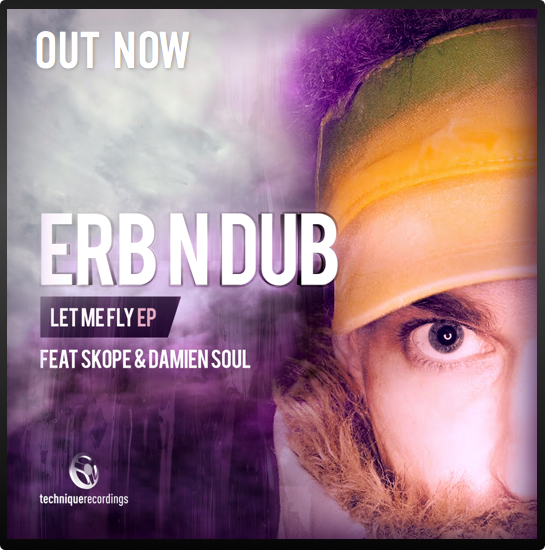 Erb N Dub was last seen on Technique as part of the musical superhero team-up that goes by the name of Hashtag. Since then, he’s been busy adding brand new chapters to his story. From his live project, Wicked City, through his four deck sets combining D&B with scratches and live drums, to his mammoth undertaking of developing his own dance music studio complex, it’s clear he’s a musician with ambition.

And that ambition is perfectly summed up by the motto Let Me Fly, this EP’s title track. Skope shares production duties and smoking vocals are laced by Damien Soul. As Damien’s blue-sky voice soars over reinforced-concrete beats and gritty mids and basses, this brings alive the sound of summer in the city. With both a full-fat Club Mix, and a Radio Mix to choose from, this is an anthem that proves D&B can go hard even when the sun’s out.

Talking of going hard, next we step into Moshpit. Airy pads and chimes are quickly annihilated by uncompromising serrated-blade evolving synth strikes, building to a steel-toed dropkick as the beats and bass hit. This is grimey dancefloor material, for when its time to pull the ravers’ backs off the wall.

Parallax offers a new perspective. Classic-sounding arpeggiated figures dance and intersect, leading to a drop in which pared-back percussion makes way for a head-nodding pizzicato-flavoured bassline. This is catchy, bouncy music with a pedigree that stretches back to eighties electro.

Finally, Erb N Dub gives us Paper Chasing. This one will have a nostalgic feel for those heads who remember raving to dark techiness in the late nineties and early noughties. Classic tropes are reignited for 2014 in an almost beatless eulogy to that style. This is a no-apology, lighters in the air piece for those that know.

With this EP, Erb N Dub has proven once more, as if it needed proving, that he’s a consummate musician rather than simply an assembly-line beatmaker. Every track expertly delivers its own mood and atmosphere, each one different and each one powerful. So, it’s time to join the Erb N Dub journey and see where his ambition can take us now.