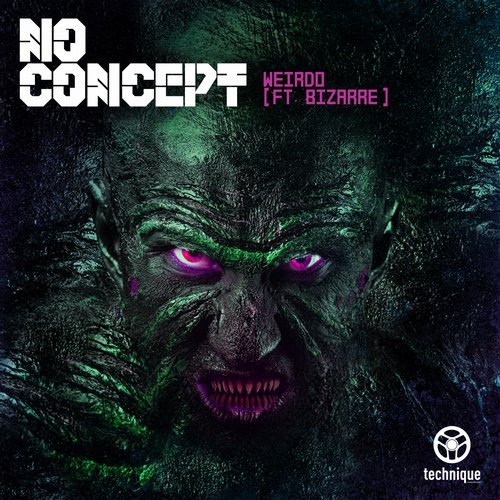 With Radio 1 airplay, A-list deejay support, download chart success, and prestige bookings at Let it Roll, Fabriclive and beyond, it’s fair to say No Concept are tried and tested Technique Recordings soldiers. And now they’re on maybe their most insane mission yet.

The first thing you’ll notice about “Weirdo” is that it features the idiosyncratic lyrical stylings of Bizarre. Yes, that Bizarre. The one with the shower cap out of D12, making, as far as we know, his first foray into DnB. As he tells us “ain’t no-one crazier than me” over the tension-ramping intro, anticipation crackles.

What’s coming is an absolutely ridiculous drop that’s going to see this tune become automatic wheel-up material. The aggressive punch of the drums is counterbalanced by the swing-time syncopation. The morphing, fluctuating bassline bounces around the frequency spectrum. This is addictive dancefloor music combining all the majesty of a big room epic with low-down gritty rave-hyping energy.

So, it’s yet another banger from the No Concept boys! And, maybe more importantly, it’s revealed yet another facet to their style. These producers raise the bar for themselves every time, and you can bet they’ll be ratcheting up to even higher levels in the near future. Watch the ride.