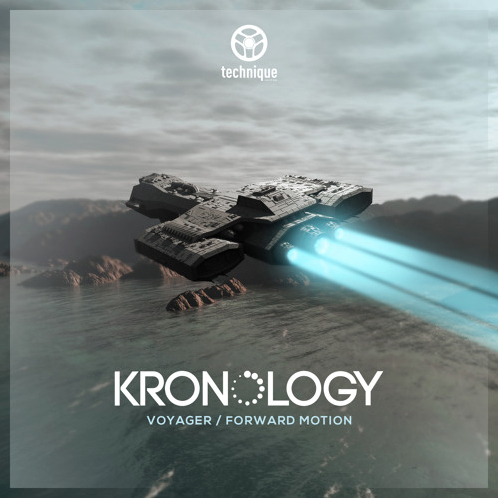 Kronology have taken no prisoners in their assault on the scene since joining Technique last year. They’ve taken the big room sound and brought an uncompromising individuality to bear, laying out their template on their huge “Timelapse” EP. So, having made waves, now the LA team are back to deliver the aftershock.

“Voyager” shows Kronology mean business. A gigantic intro made from ominous low pads, sci-fi dialogue and approaching-menace bass sets expectations high, then the drop delivers on them. A scorching laser-shot synth sets the mood in the high-end, backed up by the intense growl of the bassline and the sharp jabs of the drums. The unpredictable shuffling kick and the rising modulations keeps a continual sense of urgency going, making this one that’s bound to keep dancefloors electrified.

“Forward Motion” drops us straight into shadowy murkiness. Kronology move unsettling industrial sounds around the landscape, leaving nothing tangible to hold onto except a sense of impending doom. Then as the drums stride to the forefront, they signal the arrival of a violent array of mid-range stabs and grimy bass timbres. This is late night dark and dirty music taking influences from tech and neuro styles without ever losing that trademark arena-size sound.

This release is where Kronology demonstrate they’re going in hard for 2016. Not only are they proving their consistent ability to make the big room bangers, they’re showing off a talent for twisting other sub-genres to their dancefloor-destroying will. As these tunes drop the year is still young, but these producers are already making their mark on it.