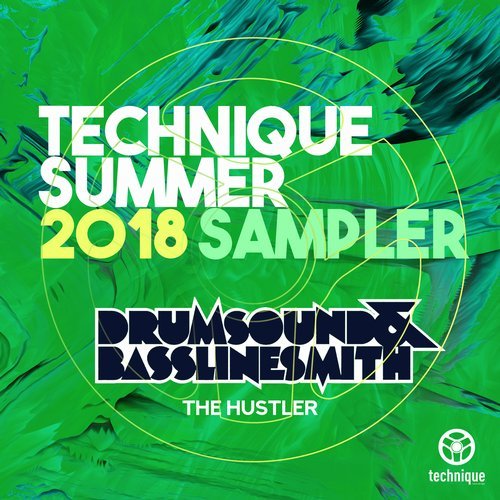 As unpredictable as summers tend to be in the UK, one thing can be relied on. In the season of carnivals, barbecues, and party tunes, the annual Technique Summer LP will deliver the perfect soundtrack. So, let’s see what DnB delights are in store for us this year. This taster comes from the Technique bosses themselves, Drumsound & Bassline Smith.

And, as you’ll probably know, since last summer, they’ve been busier than ever. Not content with releasing a brand new album and a huge North American tour, they’ve also given their own definition to contemporary jungle rollers with their recent “Kilimanjaro EP”. That’s what’s known in the trade as “work-rate”.

So, “The Hustler” comes as part of an all-encompassing surge of formula-twisting creativity for these veteran producers. And, as the first hints of percussion and siren-song atmospherics draw us into this tune, it’s clear we’re in for an epic journey. It might be a summertime track, but this is serious. As we’re hit with the punch of the drop, one thing is obvious. This is guaranteed rewind material.

Drumsound & Bassline Smith seem to have fed steroids to an upright bass, the almost jazz flavour counterbalanced by the raw viciousness of the processing. As it drills into your brain, supported by characteristic rinse-out junglist drums, there’s no doubt that this tune is going to be doing substantial damage this summer. Of course, let’s not forget that this release is just a sample of the full majesty of what’s to come from the full Summer 2018 LP. If this is anything to go by, rave and festival-goers had better brace themselves for the onslaught.