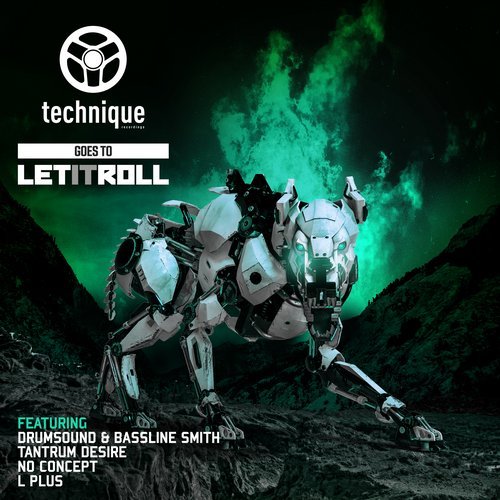 The biggest drum ‘n’ bass event on Earth, bringing together tens of thousands of ravers and hundreds of artists over three days and nights, is Let it Roll. As if that wasn’t insane enough, this August, the award winning Czech festival will be graced with a Technique Recordings Label Night. And, there’s brand new music to mark the occasion properly.

Opening proceedings is a VIP relick of a tune from Drumsound & Bassline Smith’s massive 2017 album “Wardance”. This version of “Control” ramps up the energy from the first bar, with insistently percussive synths leading the way. Then the pulsing, stomping drop, driven by a bassline with an extra layer of grit, is sculpted for maximum rave destruction.

“Vybez” delivers us into a trademark Tantrum Desire cinematic opening. Expansive pads stretch into the distance as subtle hints of drum edge towards us over the horizon. There’s no way you’re going to see the dark, scything drop coming, with a screwface bassline that screams out for a reload.

Then Technique’s latest recruits, No Concept, take to the stage. They’ve already proven capable of creating multiple styles, and with “Make Noize” they’ve built a monster. The long tension-ramping build supported by that “make some noise” sample writes a very big cheque, but the drop is more than capable of cashing it. The warping and twisting bassline, those gut-punch drums, and the adrenaline-shot fills combine into an absolute beast of a tune.

Finally L Plus gives us “Let Roll the World”. Gigantic uplifting arpeggios set the tone in the intro. The “let it roll” dialogue clip adds an extra boost of hype. And then there’s an almighty drop which rattles off a full polyrhythmic ammo belt. A syncopated pattern in the bass weaves in and out of switching percussion instruments while a rock-solid kick and snare provide the scaffolding that holds it all together.

Even in this four-track mini-compilation, the strength and depth of production skill on show makes it very clear why Technique is such a revered label. And it also demonstrates exactly why their Label Night at Let It Roll in August is going to be unmissable.