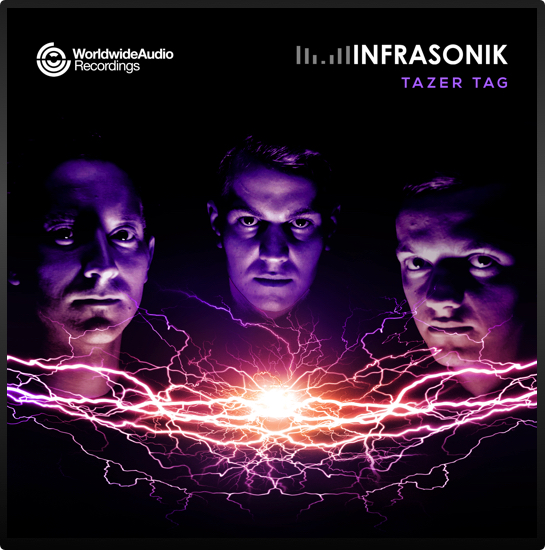 You might be thinking that Infrasonik are newcomers. You’d be wrong. Individually, Locuzzed, Dossa and Niceadvice have been carving a swathe of rave-destruction across their native Austria and beyond with monstrous DJ sets and a multitude of individual productions. But now they’re freshly signed as a team on WAR to show what they can do when their powers combine.

The EP’s title track, Tazer Tag is a shot of chemically-darkened, genetically-modified adrenaline. This is a science fiction story set in a world where everything is dangerous, with every sound rearing up and closing in as part of a paranoid percussive landscape. For obsessive compulsive genre-labellers, file this under Teutonic neurofunk. For the rest of us, consider this as one to fade to when the set needs to get a touch more militant.

Then URP goes one step more experimental. We enter in the middle of a battle between a pizzicato bass tone and a formant-flavoured stab, and this sets the pace for the rest of the track. Layers of rhythmical elements flow in and out of focus, creating disconcerting waves of energy. This is Infrasonik showing off their technical chops, delivering a dubbed-out soundsystem workout for the appreciation of beat lovers everywhere.

Then out of the shadows of the sub-basement steps the final track, Explosion. This is where Infrasonik show they can take it to the big room. Restrained guitar plucks gradually modulate over delicately varying oscillators, but this is just to set the scene. Things rapidly heat up, culminating in a powerfully satisfying drop featuring driving beats, siren calls in the mid and treble, as well as a multiplicity of masterfully twisted basslines. This is scientific dancefloor music for when you need to hype things just one notch more.

So whether the vibe you’re looking for is straight-up party or gritty dystopia, this EP proves these three producers can supply it. With an undeniable mastery of production technique at their thirty fingertips, Infrasonik is a name you’re not going to be allowed to forget.