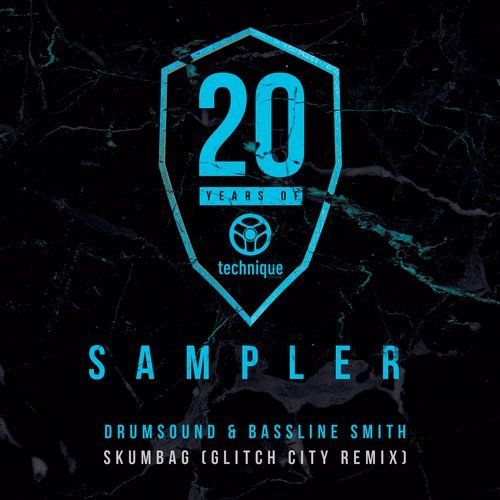 Obviously Technique Recordings was always going to go big to mark their twentieth anniversary, and here’s our first taste of what’s to come from their monumental triple album project. Making his debut Technique Recordings appearance, Glitch City is on remix duties for the 2006 Drumsound & Bassline Smith classic “Skumbag”.

We open in the familiar territory of that evocatively atmospheric riff that’s set the tone for every iteration of “Skumbag” so far. Restrained hints of percussion blend with soaring synths, and, at this point, there’s no way of knowing where Glitch City is taking us. An anniversary-worthy tension-cranking build leads the way, and we’re delivered into mayhem. Glitch City has reconfigured the elements of “Skumbag” into an explosive rave-demolisher.

Stomping bass and sonic warfare drums pound the dancefloor into submission from the first bar of the drop, but we’ve barely got started. Twisted switch-ups and break-laden fills keep things moving as Mr City lays down his vision for contemporary jump-up. More complex, layered, and rolling than your preconceptions of jump-up might lead you to imagine, this is going to hit hard regardless of sub-genre preferences.

A triple album featuring remixes, unreleased dubs, and brand new music was always going to be epic, and, judging by what Glitch City’s brought to the table here, it’s set to be unmissable.