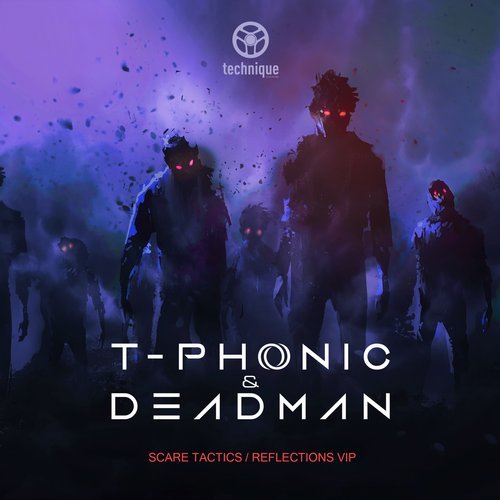 T-Phonic & Deadman are the most recent additions to Technique Recordings’ roster, off the back of their sunshine-drenched contributions to the label’s compilations last year. But those summertime vibes aren’t the only thing these two have to offer. Way before they teamed up, both producers had racked up a list of credits to rival almost anyone. Across his many incarnations T-Phonic has chalked up support from deejays as diverse as Hype, Bobby Friction and Fearne Cotton, and Deadman, in his DJ (Al) Storm guise, has become a certified hardcore legend. So, which of their eclectic production angles are they drawing for this time?

Well, with Scare Tactics, T-Phonic & Deadman have wasted no time in making their presence felt. A sinister speech about humanity’s propensity to believe in ghosts sets the tone, underlaid with neuro (and neurotic) low-end twists of sound and just enough percussion to keep anticipation at maximum. Cinematic strings ratchet up the tension even further as the dialogue morphs into FX’ed insanity. Then there’s that drop. Ultra- clean and sharp beats, an irresistible arpeggio in the low-mid, driving instant-classic stabs and serpentine, writhing bass make this guaranteed reload material. This is going to become a deejay weapon of choice for a long time to come.

The second track is a VIP twist on Reflections, from Technique’s Summer 2016 album. The original took the tropes of old skool rave, the breaks, the keys, the euphoric chords, the soaring vocal samples, and reconfigured them into a perfect summertime roller. This version takes the same elements and does something almost completely different. The intro keeps that classic hands-in-the-air vibe, but as it builds you’d better get those hands down ready to shock out properly. The bouncy synth ricocheting off the funk- laden bassline is all new and is going to cause some serious dancefloor carnage. So watch out.

So, what have we learned about Technique’s new signings? Mainly that you absolutely cannot predict what angle they’re going to attack from. The one constant is their rock-solid production, giving us crisp-as-you- like beats and rib-rattling bass every time. But, as you’d expect from two producers with their backgrounds, they can deliver anything from soul to savagery on a whim. Just hold on and enjoy the ride. T-Phonic & Deadman have arrived.