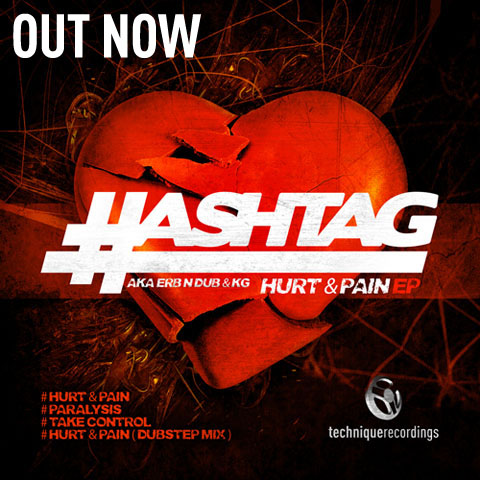 At the moment, the Hashtag name won’t mean anything to you. When you find out that it’s the new production moniker for Erb n Dub and KG, though, that means a lot. These two guys have spent the last few years becoming essential components of the drum and bass world.

Between them, they’ve remixed DJ Fresh, The Freestylers and Foreign Beggars, built three labels, signed Netsky and Fred V & Grafix, and DJ’d and performed live all over the world. That’s alongside the small matter of consistently producing dancefloor-destroying records.

Their first release after signing exclusively to Technique Recordings, the Hurt & Pain EP lays out the blueprint of what these two producers are all about. The title track weaves a soulful vocal sample and haunting melodies around sharp beats and expansive bass textures. This is a tune to make ravers float away on a hit of pure music vapour.

Next up is Paralysis, which seems to offer a similar vibe in the wandering cloud intro before flipping the vibe and bringing the thunderstorm. Hashtag throw it down hard into a grimy bassline, ghost story riffs and snappy beats that are guaranteed to cause full-on skank-out action.

Then we have Take Control. This delivers a tension-filled intro and explosive drop that’s precision-tooled rewind material. With expertly-crafted stabs and builds, to take the energy levels increasingly skyward, this is the sound of Hashtag stamping their authority on the dancefloor.

Finally, Hashtag reveal another secret weapon with a dubstep reworking of Hurt & Pain. Keeping the same atmospheric, tuneful motifs as the D&B version, the slower tempo lets the low-end really come to the forefront.

Erb n Dub and KG have proven their credentials individually, and now they’ve formed Hashtag, this elite unit is set to hit raves and airwaves hard.