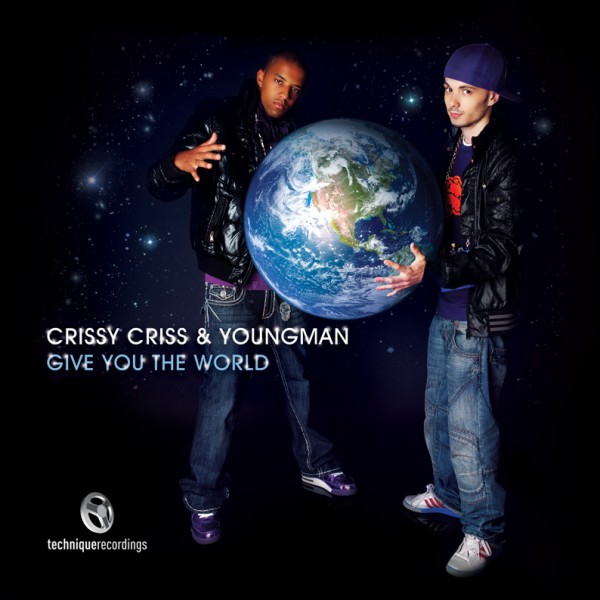 Two of the youngest upstarts on the drum and bass scene, Crissy Criss and Youngman hooked up when Youngman’s dad suggested they work together. A few cyberspace chats later and they were soon bouncing ideas off one another, culminating in a mere three-hour studio session that lead to club smash Take You Higher.

Their partnership has culminated in Give You The World, 18 tracks of blisteringly efficient dancefloor material spanning numerous genres.

Crissy Criss began DJing at the early age of 9, taking every opportunity to get on his stepdad Kenny Kens turntables. With youthful persistence and natural talent, he landed a spot on Londons Kool FM at just 11 years old, staying there until early in 2004, when Radio 1 signed the 17-year-old for their new show The Residency. He now hosts his own weekly show on the 1Xtra.

Meanwhile Crissy had been working on his production skills from the age of 13, and it wasn’t long before DJ Smokesta of Kool FM picked up on his talents, releasing Hotshots on his High Grade Music label only a year later, and the rest, as they say, is history.

The son of Simon Bassline Smith, Youngman began MCing from the age of five, developing his energetic and soulful style along to LTJ Bukem and MC Conrad mixtapes in his bedroom. Since his first gig MCing for Drumsound & Bassline Smith at a Technique Records night in Derby he has become the labels resident MC (alongside MC Biggie), performing explosive, rave-destroying sets at some of drum & bass biggest events.

In 2008 he released his debut mixtape Who I Be, which saw him flit between smooth, soul-satisfying ballads and club-driven head-nodders, cementing his arrival as a triple threat in the music industry, blazing fire across the drum & bass, R&B and bassline scenes.

His recent double-A side collaboration with Benga Ho/One & Only on Shy FXs Digital Soundboy label has been garnering heavyweight DJ support and was recently made Jam Hot Record Of The Week on 1Xtra.

Crissy Criss & Youngman’s incredible debut album sits firmly alongside the biggest names in drum & bass today, establishing the young duo as major players in UK urban music. Their previous singles have hinted at big things, and this debut long player not only shows their skills in the drum & bass world (check Give You The World for an all-conquering dancefloor monster), it also draws in dubstep (the brilliantly wonky Bats), hip-hop (Treat You Like A Lady Pt 2 featuring Harry Shotta) and straight-up party funk goodness (Rave Guide) to create an album that’s dripping in sexy vibes and insatiable energy.

From the bass bin to the bedroom, Crissy Criss & Youngman have got it covered.