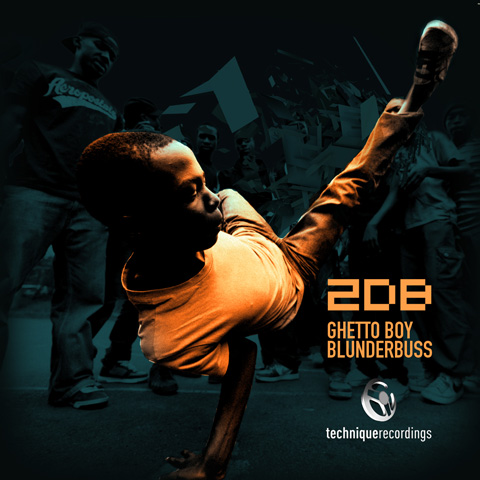 For drum and bass lovers, the 2DB name evokes the golden days of rave delivered with a future-proof production style. And they’ve been working hard to cement their position as official torch-bearers for their style.

Only this year, they’ve hit hard with the huge “Virus” from the “Crossfire EP”, “Amiga Man” backed with “Happy Days”, and the monumental “Break the Walls EP”. While the scene’s still reeling from that assault, they’re back with this one-two punch of “Ghetto Boy” and “Blunderbuss”.

First up, “Ghetto Boy”. For anyone who knows their music, the title is enough to build excitement about this track. We all know Donny Hathaway’s “Little Ghetto Boy” vocal, and Dr Dre’s seminal use of it on his 1992 album “The Chronic”. Now, 2DB have taken it to another level. Beautiful, liquid bass and crisp, seventies-influenced beats roll under the classic sample, capturing its soul and rewiring it for a 21st century audience.

Then, just in case you thought 2DB had gone soft, they smack you in the face with “Blunderbus”. Full on jungle percussion builds and evolves, underpinned with a driving bassline to keep die-hard ravers on the dancefloor. This is archetypal funk-filled drum and bass music that will be an instant get-up-and-skank moment wherever it’s dropped. This release is another milestone in 2DB’s ever-advancing campaign to make the old skool new again.

If you didn’t think drum & bass producers could do soul and funk, then these tracks are going to prove you wrong. These tracks are perfect DJ tools to flip your set between styles, or to drop on your radio show to demonstrate what true D&B can be.