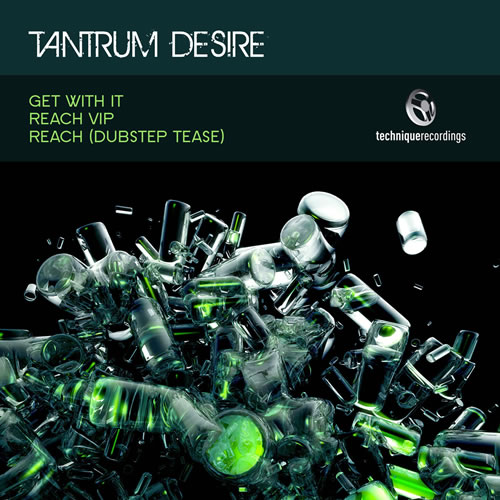 Production duo Tantrum Desire are veteran innovators of the modern drum & bass scene. Having been making moves in the game since the early noughties, they caught the eye of Technique bosses Drumsound & Bassline Smith in 2008 and really stepped up a gear.

Fast-forward to today and they’re in demand as DJs all over the world, they’ve built up an impressive back catalogue of remixes and original productions, and all their tunes get heavy rotation on the radio and in the clubs. Their rise isn’t showing any signs of stopping either.

This release, which is already getting dropped regularly by Friction on Radio 1 and Hype on Kiss 100, emphasises their diverse influences. “Get With It” is a guaranteed floor-filler from beginning to end. It builds layers of percussive synths and drums, including the classic Amen break, into a drop designed to drive ravers crazy. But it still has more to offer. Tantrum Desire push their synth-manipulation to increasing heights to give an evolving sound that doesn’t let up.

“Reach”, like Tantrum Desire themselves, already has a proven reputation. The original version has already created a huge buzz, in no small part down to the hundreds of thousands of views the video has on YouTube. The VIP mix takes the original and forcibly injects it with a hypodermic full of steroids. The euphoric intro is still there but now it’s the calm before the storm of a drop that’s a guaranteed screw-up-your-face moment for anyone who loves bass.

Then, we’re treated to two more twists on the same theme with the Dubstep Tease and the tempo-switching madness of the D&B Dubstep Tease versions.

These tunes show just what Tantrum Desire are all about. They draw on sounds from across the musical spectrum and expertly sculpt them into drum & bass dancefloor bombs. This release will hit hard across the airwaves or in the dance, wherever high-energy bass music is appreciated.