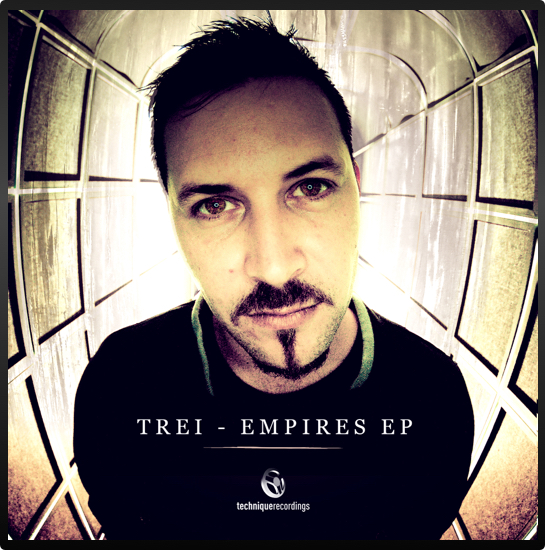 If you’ve been paying attention, you’ll already have been spinning TREi’s first Technique excursion, his remix of Digital’s Midnight, which dropped a few months ago. And you certainly won’t have overlooked this New Zealand producer’s prolific output on other top-tier labels like Viper, Commercial Suicide and Shogun over the last few years.

And with this EP already having chalked up Radio 1 play it’s clearly time to focus and see what’s up. What’s up first is Empires. A darkly atmospheric intro draws us in. Then as the low-end sparks into life with gritty sub-troubling textures, combined with an interplanetary siren-song, you know that things are about to get weighty. Then the drop strikes straight to your solar-plexus with the punch of militant drums and raw, serrated bass. This is a call to the soldiers in the dance to mobilise.

Then Masquerade switches things up. Dropping straight in, fully-formed with an almost deep house flavour set to a drum and bass pulse, this looks set to be a laid-back one for spaced-out ravers to make floaty shapes with their glowsticks. But then there’s an edge as TREi brings in some mid-range drive and as the beat kicks back in those ravers are forced to liven up and look sharper. This may be a light-headed and soulful but there’s no doubt you’re meant to move to this.

Next, TREi steps up in collaboration with Fader to weave together the dark and the light for Identity Crisis. If you want to show off your classical music training, you could talk about this as a fugue, the sound of a theme being constantly reinterpreted. For the rest of us, the evil pads which meld into lighter strings and the sharp stabs switching their emphasis from treble to bass simply create a powerful assault of dancefloor energy.

Finally, it’s Born Killer. This is all about the hooks. First, there’s the He’s a born killer! dialogue sample to make this instantly recognisable. Then there are the gangsta horns to set the tone. Then there’s an almost jarringly syncopated broken chord which sets this apart. And amidst all this there’s a mighty surge of bassline and drum to pound the rave into submission. This is going to be a staple element of many sets for some time to come.

So TREi has introduced himself properly to the Technique faithful. With this EP he’s shown he can pull in elements from multiple styles, draw upon an array of musical forms and influences and make them all conform to his rave-shaking will. If the title of this release, Empires is a statement of ambition, then this is another step on the road to conquest.