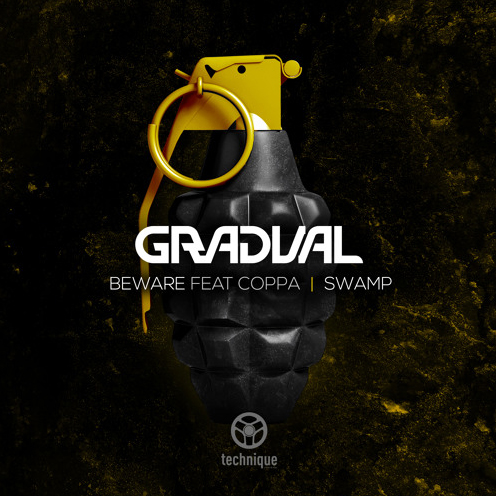 As drum & bass made deeper inroads into the sunlit land of daytime radio and mainstream acceptance in 2015, the underground scene was defined by the dark and technical sound of neurofunk. And repping that style for Technique are one of their most recent signings, the Spanish production team made up of veterans Alerstorm and Ice Stereo, a team now known as Gradual.

“Beware” asserts its personality right from the intro, demonstrating that Gradual aren’t shy of adding a little funk to their neuro. The mighty mic man Coppa rolls through to lay out the groove, delivering a scheme that gives that James Brown-style accent to the first beat of the bar. Even amidst the swirl of dark atmospherics, the urge to get your head nodding is irresistible. Then the heavy grind of the bass that sweeps in from the drop takes the heat up to the next level. It’s precision-engineered music that expertly balances production science with dancefloor drive.

Then “Swamp” does things a little differently. Opening with high strings and a hint of approaching drums, Gradual draw us into a light cloud of chill-out ambience. This is savagely punctured by a blade of low-end, signalling the approach of something far more dangerous. That something is a stompingly percussive pattern of drums and bass, but that’s just the beginning as the beat switches up and builds even further. And this tune keeps going from there, melding and interweaving layers of drums and bassline to keep that rave engaged right to the end.

If you haven’t caught up with Gradual’s movements yet, this is where to get on board. This release shows just a few of the facets that these guys can bring to their sound. Along with the cold scientific studio skills, they’ve got a raw funky rhythmic sensibility, adding up to a clear understanding of how to keep raves electrified. They’ve got a lot more to show off, so better pay attention.