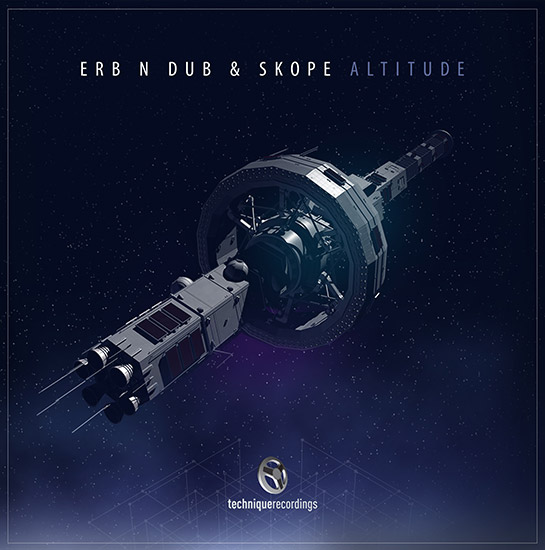 Under the radar, and with the minimum of fuss, something deadly has been released into the D&B scene. It was late 2014 when the “Let Me Fly” EP signalled the arrival of the Erb N Dub and Skope team-up to Technique.

Since then, they’ve loosed a highly-targeted selection of musical shots, each time adding another unpredictable twist to their sound. Until this release, identifying the formula they’re working to has seemed an impossible task. Now, though, the truth has finally become evident. There is no formula.

“Altitude” arrives with a deep and humid environment, conjuring shades of nineties atmospheric jungle with a disconcerting element of darkness. Vinyl crackles vie with a sharp edge of digital distortion to maintain an incessant mood of tension. And the constant shifting and writhing of the rhythm takes the normal interplay of downbeat and upbeat to a new height of complexity.

Even the apparently-metronomic snare, which is the closest thing to a still centre the tune has, modulates and reforms as the track progresses. This is simultaneously addictive, dazzling and baffling, a pocket universe in which small-hours ravers can lose themselves.

Meanwhile “Drummer” adds a totally different complexion. Weaving a nexus of dense jungle undergrowth in the intro sets the tone. Then, as the title and punctuating dialogue samples suggest, this builds into a tune that’s all about the percussion.

Bass squelches and sweeps provide a bed for driving tribal kick drum bombardments, pitch-shifting snares and variations in the second half of the track that are straight out of the showing-off-at-drum-programming handbook. These beats have everything the most technical edits aficionado might desire, but delivered with a funky dancefloor sensibility that keep this tune aimed squarely at the rave.

It’s clear that Erb N Dub and Skope share a passion for rhythmical and musical innovation that supercedes any thought of genre conventions. They’ve both worked in multiple styles, both inside and outside of the boundaries of D&B, blurring the lines between live and synthesised, studio tools and musical instruments. So, when they team up to drop a tune the only thing you can predict is that you’ll want it cued up at the other end of your crossfader.