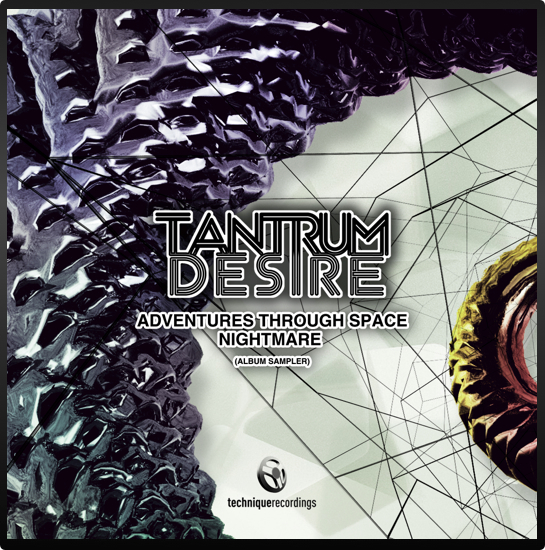 After Technique’s mammoth, multiple-instalment 100th release celebrations, they clearly had to come with something monumental to keep things moving into the next century. And things don’t get much more monumental than the first taste of the forthcoming album by Tantrum Desire. With this team’s track record of worldwide acclaim in the underground and mainstream, you’re going to want to pay attention.

Things get epic straight from the opening bars of Adventures Through Space. Timpani rolls and powerful crashes punctuate an evolving cinematic soundscape, until stabs and percussive sounds signal that things are about to get nasty. In the world of big-room build-ups, this is about as big as it gets, and the energy just keeps rising from there, driven by surgically-sharp drums and bass. This is a tune destined to get pulled back and taken from the top on a regular basis.

Then Tantrum Desire darken things up a shade with Nightmare. Slasher-flick tension permeates the intro, which is only ratcheted up further when a rising synth pattern leads us into the drop. This delivers a stepper in the mould of techno-influenced tracks of the late nineties, although with unmistakeably contemporary clean and clinical production values on display. Here’s one Nightmare that’s bound to keep the dancefloor awake.

So, these two tracks serve as an omen of the dangerous sounds yet to come. Tantrum Desire’s album is guaranteed to be one of this year’s hottest releases, so these tunes are sure to make an appearance wherever bass-conscious DJs have their fingers on the pulse.