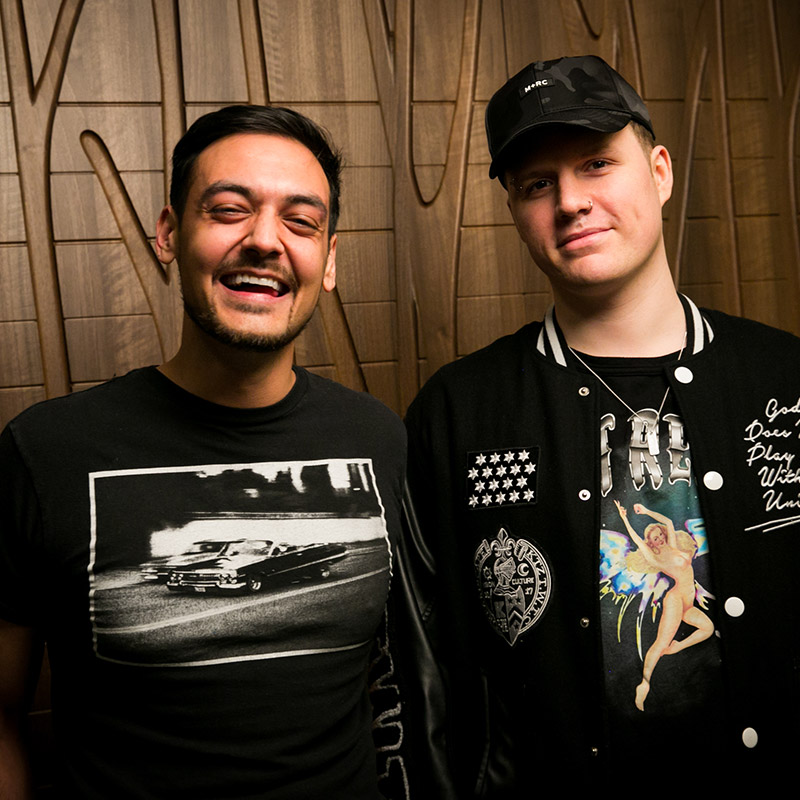 Meet Brian and Russ, aka No Concept. Coming up in the bass music scene of the UK’s south coast, it was almost inevitable that their shared passion for constructing powerful dancefloor beats would lead them to start collaborating. And so the seeds of No Concept were planted.

Simultaneously, Russ, aka Russla, was rising through the ranks of Bournemouth’s drum & bass scene. As a DJ, he became a regular fixture of the biggest line-ups in the area.

Now signed exclusively to Technique and with Nowhere To Hide and Fingers from their Soundcheck EP out now on Beatport, what better time for a few words.

Where are you from and to what extent would you say this influences your music?
Russ – I’m from Bournemouth. I’d have to say all my friends naturally loved dnb and most of them were bedroom DJs too, it was inevitable I was to join in!

Brian – I’m London based these days but lived in Bournemouth for the best part of a decade until quite recently. The local circuit is what linked me and Russ in the first place, being a part of it both as fans and as local artists is what eventually led to us the whole project coming into existence!

How would you describe your approach to music?
We’ve always had a passion for being as original as possible whilst respecting the importance of staying relevant at the same time. We like to explore as many different avenues as we can when writing, which often results in a lot of scrapped material in pursuit of putting together a banger!

We like to think we have tracks that can stir up some movement on the dance floor as well as some more melodic emotive material, if it works, it works!

You’ve previously been known as Glass Cobra, why have your rebranded and what’s happening with Glass Cobra?
The name leant itself towards the harder more neuro side of dnb and with this new name it has a sense of ambiguity about it, no preconceptions. We’ve also worked really hard to step up our game in the last year or so and comparing our new and old material it felt right to explore the idea of a rebrand.

How did you hook up with Technique in the first place?
Hard graft! We’ve both been longtime fans of the labels output and felt that the diversity displayed within their roster was something that could be well suited to our approach to music.

We dropped Simon Bassline Smith an email to see if Technique were accepting demos not really sure what to expect. We got some interest in the material but looking back we weren’t really as ready as we thought we were.

From there we put our heads down and wound up sending over a series of maybe 10-15 more demo tracks over the course of a few months. We spoke a bunch of times and Simon encouraged us to really push ourselves to get up to standard, around the beginning of this year it all came together and we signed exclusively with Technique, which we’re still pretty gassed about!

Talk us through the tracks on the Soundcheck EP…
Nowhere To Hide throws dark trancey influences together with vocal lead heavy/dancefloor styles. We actually scrapped the drop altogether and rewrote this track three times before settling on the final version!

We like to think we show a little bit of versatility in this release. 4dayz and Fingers are intended to be straight-up no-nonsense, rowdy tunes, particularly 4dayz which we kind of think of as straight up raw and trashy with the rocky cymbals in the drums and super distorted, resonant bass sounds.

Waste My Time has its dark moments similarly to Nowhere To Hide, but the drop has an all round more bouncy, high energy approach channelling some of our slightly more old school influences!

What are you currently working on in the studio?
At the moment we’re working on a whole bunch of ideas, including some big features we’re very excited about. There are real wall slappers as well as some smooth melodic stuff in there.

Where can people see you play in the near future?
We’ve been in lockdown in the studio for so long we’ve actually not been DJ’ing for a while. Now with the first No Concept release coming out we’re ready to hit it hard, keep an eye on our socials!

Anything else you want to tell us about?
Big thanks to everyone who has shown support so far, means a lot!